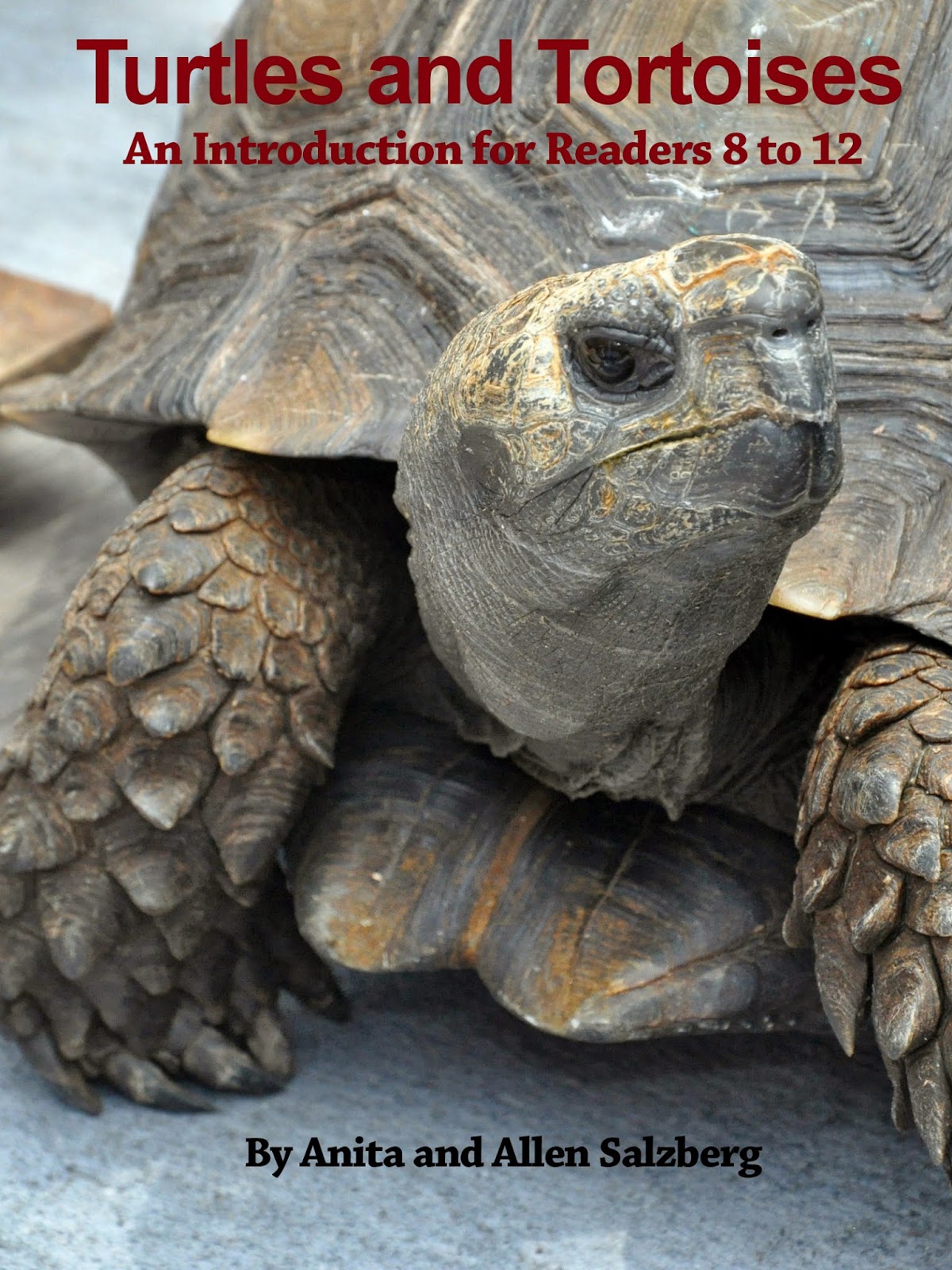 Hot off the “presses”: the updated Ebook-edition of our bestselling children’s book, Turtles!

With new photos and current information, Turtles and Tortoises is the perfect gift for a child who likes turtles!

Lively and engaging, Turtles and Tortoises delves into turtles’ habits and habitats, physiology and biology, adaptations for living on land or in water, and much more.

“A must have for any child’s science/natural history library.” – Library Book Review

“This book was a joy to read, and is well worth the price. I’ve read hundreds of turtle books and never have I seen such a well-planned, informative, and pleasant book for children. –A reader from California

Don’t wait: get your copy today at a special
introductory price: Just $1.99 thru Feb 28!
(Will be $4.99 in March)
================================
You're receiving a subscription to Turtle Wife's free newsletter, TURTLE STORIES, NEWS & VIEWS, because you signed up for it or are a friend or family member. This newsletter is published bi-monthly, on no set date. I will never sell, trade or give away your e-mail address — period. Feel free to forward this newsletter to friends!

** TO SUBSCRIBE to this newsletter **
Send a message to newsletter-subscribe@turtlewife.com. Wait for a confirmation message in your e-mail. Simply Reply to the message (no text necessary), and your address will be automatically added to the mailing list.

** TO UNSUBSCRIBE **
Send a message to newsletter-unsubscribe@turtlewife.com. Reply to the confirmation message in your e-mail (no text necessary), and your address will be automatically removed.

GRAB CONFESSIONS OF A TURTLE WIFE
for your sweetie who loves turtles! 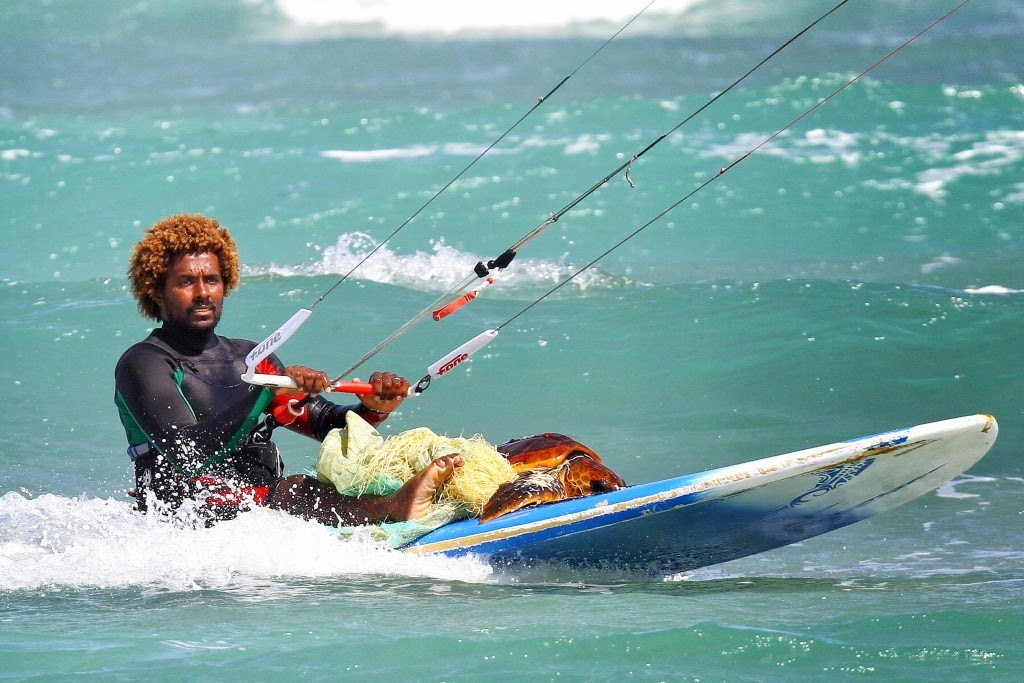 As he was riding, world champion kitesurfer Mitu Monteiro
noticed something floating in the water dangerously close to
the rocks of Serra Negra Beach on Sal Island in Cape
Verde, Africa.

Disregarding the danger, Monteiro rode in to take a closer
look only to discover a distressed sea turtle tangled in plastic
and struggling to breath and swim.

“I know it would have died if I didn’t rescue it,” Monterio told
Caters News Agency. “She was unable to get food as the
filament was preventing her from diving and it was wound
tightly around her neck.” 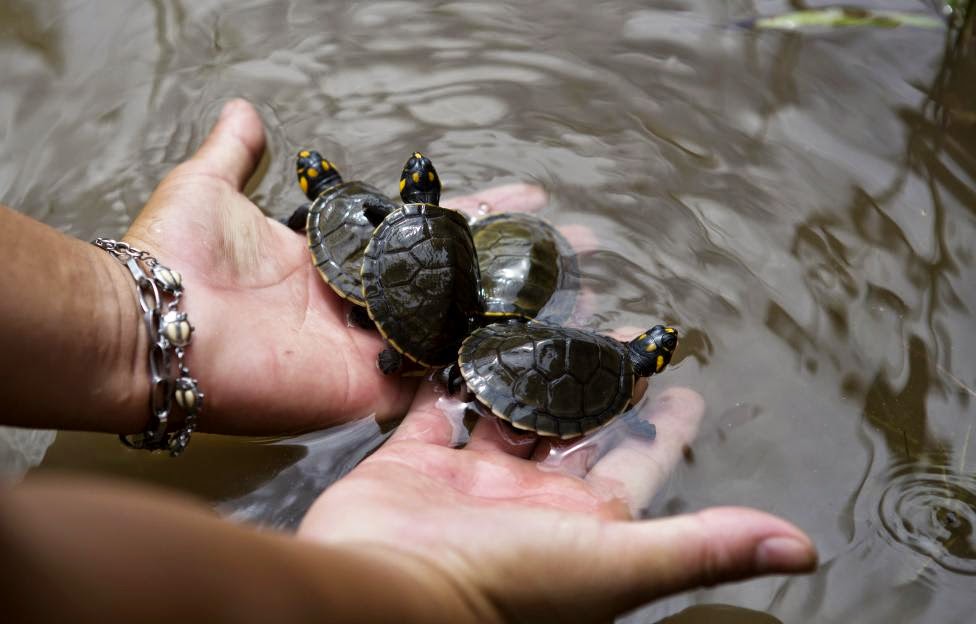 Quelonios turtle hatchlings are released by members of the
Pe-de-Pincha project, into a lake of the Igapo-Acu community
in the Amazon municipality Careiro, Brazil February 5, 2015.
According to the project, which is part of the Federal University
of Amazonas, they are releasing 1,230 hatchlings into the wild.
================================
No Soup for You! 22 Endangered Baby Turtles,
Destined for Stock Pots, Now Safe at SoundWaters 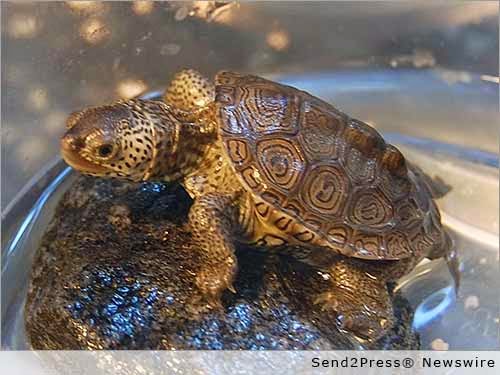 As part of a global wildlife-trafficking issue that is growing
exponentially, 22 tiny baby turtles - likely destined for soup
pots in China - were recently rescued and brought to a
nursery at the SoundWaters Coastal Education Center,
where they are being coddled and cared for after a harrowing,
near-smuggling experience. 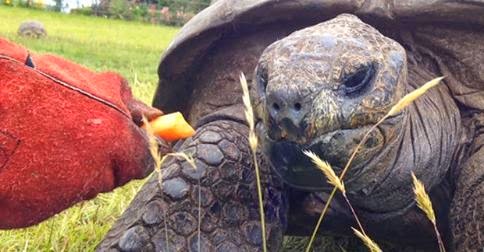 Jonathan the tortoise, who lives on the British territory of St Helena,
is thought to be the world’s oldest living land creature.
His wrinkly skin, cataracts and difficulty swallowing are common
enough in old age. But Jonathan had been ambling around for a
century before today’s pensioners were born.

At the age of 183, this tortoise is thought to be the world’s oldest
living land creature. Born in 1832 at the latest, he has plodded
through two world wars and numerous revolutions, outlasting all
his human companions. He was even photographed, looking rather
elderly, with a prisoner during the Boer War, which ended in 1902.

They might not have killed it, but two Miami men landed
in the Keys jail Thursday when they were found with the tail
of a loggerhead sea turtle in one of the men's truck.

David Hernandez Sordo, 48, and Pedro Suarez, 59,
remained in the Monroe County Detention Center Friday,
each charged with a felony count of possessing a sea turtle.
Loggerheads are federally protected due to their
threatened status. 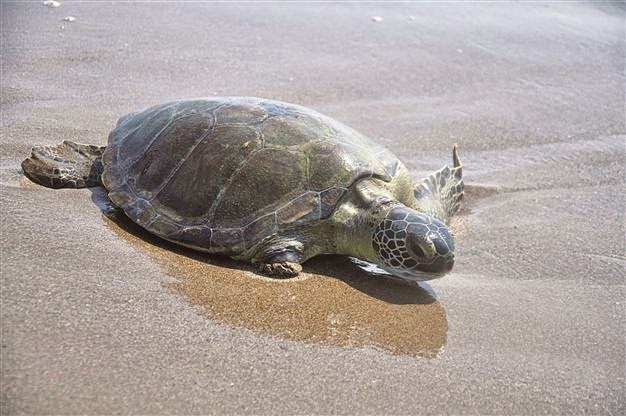 Sixteen sea turtles have so far been released back into their
natural habitat after being treated at Turkey’s first ever sea turtle
medical center, in the Mezitli district of the southern
province of Mersin.

Sea turtles are treated as an endangered species at the center,
which is located in the 100th Year Davultepe forest in the district.

The center treats turtles that have been wounded in shark attacks
in the sea, dog attacks on the shore during spawning periods,
or after getting caught up in fishnets. They are looked after in giant
water tanks until they are fully recovered. 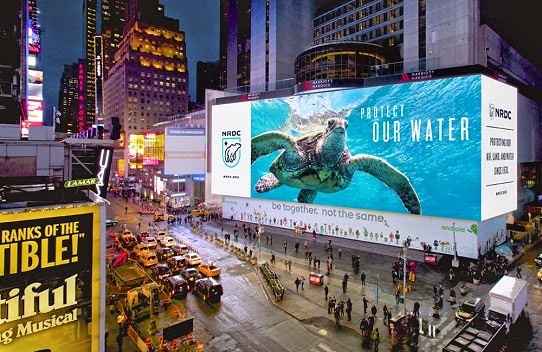 In the same year that gave birth to Earth Day and the modern
environmental movement, five idealistic young attorneys
banded together to protect the nation's precious resources
and wildlife. Determined to overcome the forces of pollution
and corporate greed, they called themselves the Natural
Resources Defense Council.

Four and a half decades later, NRDC is the powerhouse of the
environmental movement. Employing nearly 500 scientists,
lawyers, and policy experts backed by 1.4 million members and
online activists, we fight for the planet and its people in the halls
of Congress, communities across the country, and nations
around the globe.

Read more about this vital organization. 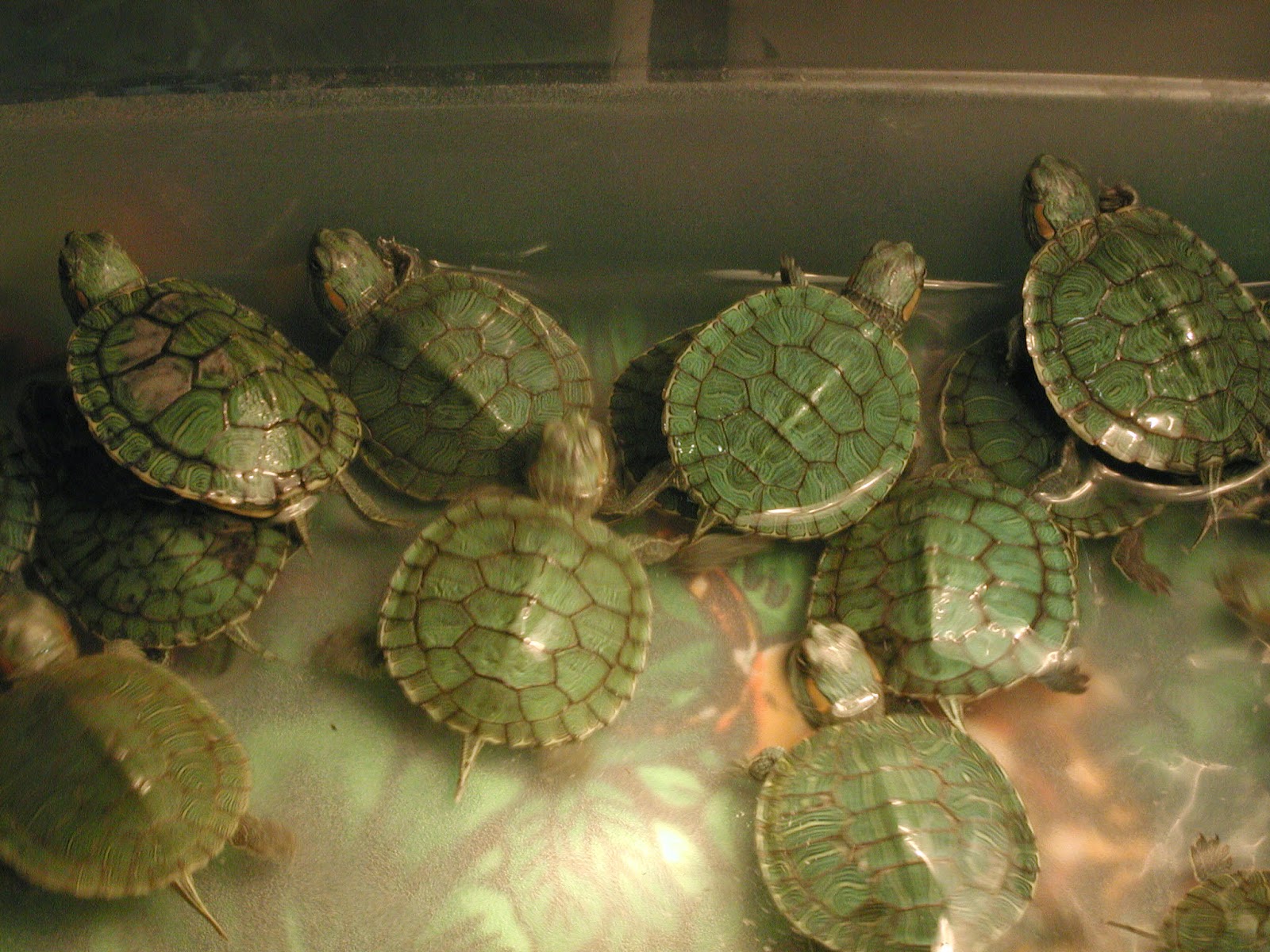 Look for a ceramic turtle in front of the store. That’s the signal.
James knows it’s the spot to score red-eared sliders.

It’s a perfectly timed endeavor. Eight minutes before closing
time, James (who asked that I not use his last name) dashes
into a New York Chinatown tchotchke shop—located on Mott
Street, just below Canal—with a wad of cash. The boxes are
waiting for him. A shopkeeper, a woman in her 70s, struggles
to wrangle them from a back room obscured by a curtain and boxes
of paper fans.

It looks like she ought to buckle under the weight, but she
manages, and when he arrives, they are ready to be moved
—quickly. He hands over $200: exact change. “100 cages,
too,” he says. “The good kind.” He counts out another $100,
and the woman shuffles away to retrieve them. 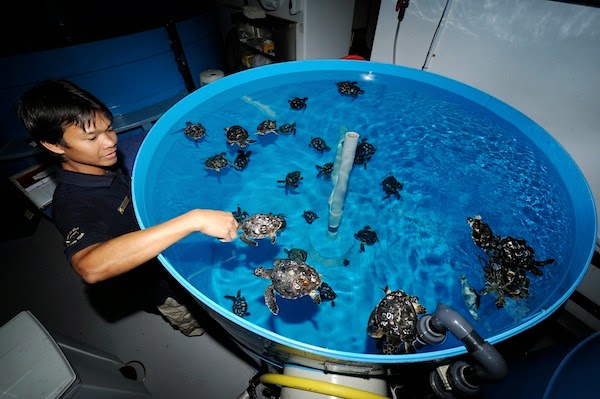 The aquarium at Burj Al Arab is an integral part of the world’s
most luxurious hotel.  In three segments, the aquarium
provides an ornamental backdrop in the lobby and complements
and adorns the guests’ dining experience both in the private
dining area and in Al Mahara, the Burj’s signature seafood restaurant.

The aquarium is also the site of ground-breaking conservation
initiatives, the most notable being their sea turtle rehabilitation
project which is run in collaboration with the Jumeirah Group
and Dubai’s Wildlife Protection Office.

Why Being a Reptile Lover Means Always
Having to Say "I'm Sorry." 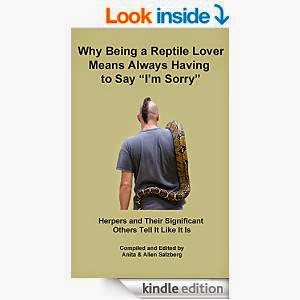 And:
You Know You’re a Herper
WHEN YOU DREAM IN GREEN 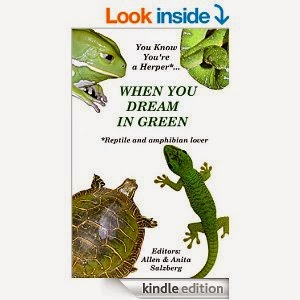 THE NEW YORK TURTLE & TORTOISE SOCIETY:
A nonprofit 501(c)(3) organization dedicated to the conservation, preservation of habitat, and the promotion of proper husbandry and captive propagation of turtles and tortoises. www.nytts.org

TURTLE RESCUE OF LONG ISLAND: A non-profit 501(c)(3) organization that works to rehabilitate native turtles and find homes for those that cannot be released. Also takes in and adopts out turtles and tortoises of all species that can no longer be kept for whatever reason. Location, Long Island, New York www.turtlerescues.org

INDIANA TURTLE CARE in New Palestine, Indiana, is a nonprofit organization dedicated to rehabbing injured and unwanted turtles. www.indianaturtlecare.com Contact: zooperior@comcast.net
=================================
** TO SUBSCRIBE to this newsletter **
Send a message to newsletter-subscribe@turtlewife.com. Wait for a confirmation message in your e-mail. Simply Reply to the message (no text necessary), and your address will be automatically added to the mailing list.

** TO UNSUBSCRIBE **
Send a message to newsletter-unsubscribe@turtlewife.com. Reply to the confirmation message in your e-mail (no text necessary), and your address will be automatically removed.

Should your e-mail address change, please unsubscribe, then re-subscribe with your new address.

CONFESSIONS OF A TURTLE WIFE: E-BOOK
The story of a turtle-challenged marriage. Read Chapter 1 at www.turtlewife.com. 214 pages. Paperback at Amazon or B&N.

Posted by Anita Salzberg at 4:38 PM

Anita Salzberg
For my husband and I, "turtles are us." I've written a book, Confessions of a Turtle Wife, to describe my turtle- challenged marriage, especially the beginning phases, before I "crossed over" to the turtle side. Today, my husband Allen and I live in a NYC apartment with two cats and 5 turtles.